Sweet, fluffy Easy Cinnamon Rolls made with a brown sugar cinnamon swirl, and topped with vanilla cream cheese icing are outrageously delicious! This simple, “quick rise” recipe is great to make for breakfast, brunch and perfect for the holiday season.

Cinnamon Roll lovers, this recipe is for you! I can say that will full authority, too. I’ve always loved cinnamon rolls but I’d been a bit hesitant at tackling what appeared to be a complex recipe for them.

Now, it’s game over! With this simple recipe, using instant rise yeast, I’ve mastered the art of cinnamon roll making. Over the past month, I’ve made this recipe no less than 6 times. Each time, these beautiful, sweet, sticky, buttery rolls have turned out perfectly.

Why You’ll Love These Cinnamon Rolls

What You Need To Make This Recipe:

This recipe is so easy that you’ll be making Cinnamon Rolls before you know it!

How To Make Cinnamon Rolls

Add the flour, yeast, salt and sugar to the bowl of a stand mixer. Heat the milk in the microwave or on the stove until just warm. Add it along with the room temperature eggs and softened butter to the dry ingredients. Using the dough hook attachment, mix until the four is completely incorpotated, about 4 to 5 minutes. Cover the bowl with plastic wrap and let the dough sit for a minimum of 15 minutes or up to an hour at room temperature

Mix Up The Filling

While the dough is rising, mix together the brown sugar and cinnamon in a small bowl. Once the dough has risen, turn it out on to a floured surface, and roll it out into a rectangle. Spread softened butter over the dough and sprinkle on cinnamon sugar. Roll the dough into a log. Cut into 8 large rolls and place into a prepared baking dish. Cover and let the rolls rise for 20 minutes. Bake the rolls for 30 – 35 minutes or until golden brown.

In a medium size bowl, using a hand mixer or whisk, blend together the cream cheese, butter, confectioners sugar, vanilla, salt and milk until smooth. Slather over warm rolls.

Can These Cinnamon Rolls Be Made Ahead Of Time?

Yes, they sure can! I’ve made them ahead of time over the past 2 weekends and they turn out great. Turn them into “overnight” cinnamon rolls by making them, then placing them in the prepared baking dish. Do not let them rise at room temp. Cover with plastic wrap and store in the fridge overnight. Before baking the next morning, remove the pan about 45 minutes prior to baking.

Can You Freeze Cinnamon Rolls?

You bet. This recipe freezes beautifully. To freeze, make the rolls and let cool completely. Wrap them tightly in plastic wrap and store in the freezer for up to 3 months. To serve, let the rolls thaw completely, warm them, and slather on the icing. YUM!

Last but not least…

If you make these Easy Cinnamon Rolls, be sure to leave a comment and a rating. I always love hearing from you! Also, if you make this recipe, snap a pic and tag me on Instagram. I’d love to see your photo. 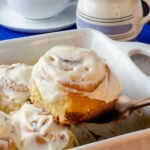 Did you make my Easy Cinnamon Rolls?I’d love to see! Share on Instagram, tag @asouthernsoul, and use the hashtag #asouthernsoul!
Tag on Insta Leave a Rating

Comfort Food With A Twist

Subscribe now for the latest recipes, tips, and secret ingredients!

Comfort Food With A Twist

Subscribe now for the latest recipes, tips, and secret ingredients!